If it’s not clear by now that General Motors’ most serious motorheads are in charge of its ambitious electric-vehicle program, meet Ken Morris. He began his engineering career at Borg-Warner where he worked on high-performance transmissions, and in 1989 joined GM as a brake engineer. Morris later became the first in a long line of GM engineers to test cars on Germany’s Nürburgring Nordschleife, accumulating more than 1,800 laps. More recently, Morris drove a C7 Corvette pace car for the Saturday race of IndyCar’s 2017 Belle Isle Grand Prix.

GM last November named Morris its vice president for electronic and autonomous vehicles, replacing Doug Parks, who was promoted to an executive vice president position. Morris and Parks were key participants last month in GM’s EV Day, where GM CEO Mary Barra and president Mark Reuss led the unveiling of 10 future electric vehicles (photography was prohibited) due by 2025, and the new modular Ultium battery system that will power them. The battery system is designed to provide up to 400-plus miles range and quick recharging, as well as appealing profit margins for GM—engineers are working to cut per-kilowatt-hour cost from about $145 today to less than $100.

Shortly after EV Day, the coronavirus pandemic hit, causing widespread business shutdowns and, briefly, below-$0 per barrel oil. What does this mean for GM’s ambitious EV goals? Automobile caught up with Morris to find out. 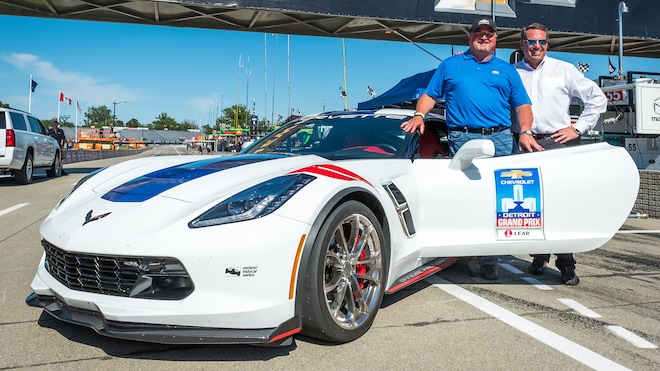 When will you lap some GM Eletric Vehicles at the Nürburgring Nordschleife?

KEN MORRIS: As soon as able. I really think that’s a great proving ground for any car. And I think that … the vehicles right out of the gate are going to be enormously fun to drive in terms of acceleration and everything. I think that’s one of those natural evolutionary steps to get them to the point where you’re that enthused about the performance, where you’re trying to make them perfect on the Nürburgring.

You would probably take only performance EVs, but given the instant torque, many GM electric vehicles might qualify …

KM: It all depends on how you want to set them up. Obviously, it’s just like any car, you set them up for fuel economy or full performance, or a combination, but the dynamics and cooling and everything that goes along with them is something that you have to very specifically decide based on the case for a vehicle.

Barra, Reuss, and Parks showed off 10 new models at EV Day, all due by 2025, which included some of the 20 GM electric vehicles promised by 2023. That’s a lot of EV models to add to more than 30 models presently in your U.S. lineup. Are these EVs going to displace conventionally powered cars?

KM: Long term, for sure. Our future’s electric. You’ll start to see some vehicles going away and frankly it’s already happening a little bit. Industry-wide, sedan lineups are really, really shrinking. We’re replacing those sedans with CUVs and SUVs and things that the customers really are wanting more than they want sedans. I think you’ll see a natural evolution. There may come an end of the run for certain vehicles, and they’re replaced with an EV versus us redoing it as an ICE [internal combustion engine]. … And you know the life cycles on cars. It’s not like this is going to happen overnight.

We have the installed capital and capacity, and we’re really trying to make the internal-combustion-engine vehicles as good as we possibly can for the customers because it’s such a competitive market. If we let our guard down with all of the vehicles we have in the market right now, you start losing very quickly. I see for sure a day when we’re all-electric, and how many years is that from now? Maybe sooner than people would think. 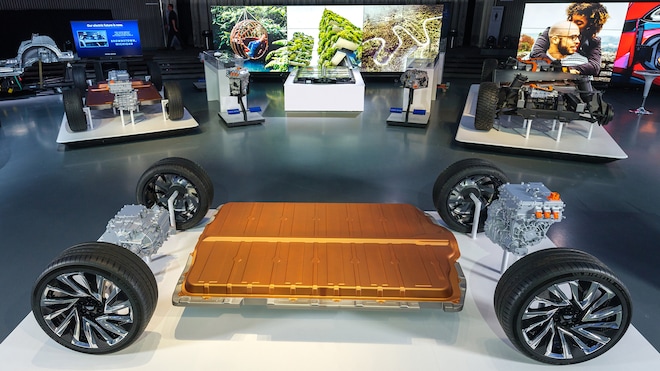 What does the oil-price collapse do to the overall outlook for GM electric vehicles?

Two, you also talk about the driving experience and the ownership experience. You don’t have to go to the gas station at all. You can charge at home, you can charge at work, you can charge at the rapidly growing infrastructure that has charge stations around the country. When we used to do calculations around hybrids, there was a certain amount of cost impact to put a hybrid system in a car. What you saw at EV Day [with the Ultium propulsion system, the battery cell, the cell chemistry and the value chain of how GM builds cells and modules and battery packs] … we’re trying to get the costs down, material costs down as close to parity as we can with an internal-combustion engine.

If you can sell a vehicle that doesn’t use any gas at all for the same price of a vehicle that does burn gas, you don’t have to do that math of, is it worth the payback or not? We’re not there yet. Today we’re getting much closer, the research does tell us that for now a customer will pay a select premium for an EV vehicle, but they’re not going to pay a big premium. And so, our job is to get those things as close together as we can. 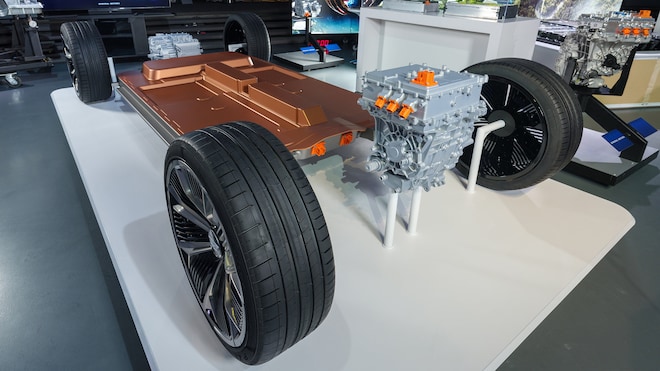 GMs best-selling model aside from the full-size pickup trucks has been the c-segment Chevy Equinox, a compact SUV that sells for about $30,000. Will you be able to convince Equinox buyers to spend a few thousand dollars more for an EV because of the fuel and maintenance savings?

KM: We’re trying to give a full portfolio of vehicles where a customer has a lot of choices. We have the b-segment [subcompact] SUV; we more or less invented that category 10 years ago. And there are going to be people that are so price conscious that they want a $19,000 vehicle, and for the moment at least, maybe electrics aren’t right for them. But our job is to get to the point where we can offer them an Equinox-type vehicle, either an electric or an internal combustion, and they can choose what they want.

The first EV models you introduce—the Cadillacs, the GMC Hummer—all will be at the top of the Ultium-powered price range, which can better absorb the current battery cost …

KM: On a daily basis we’re talking about how we drive that down. And we really don’t see a limit of the downside yet because there are so many opportunities in that chemistry and how they’re put together. We do have entries in every category and every brand. [Beside the GMC Hummers and Cadillacs] … we have Chevy entries, too. It’s going to have a broad band of price entry points. That’ll come very quickly between now and 2025.

Do you see a floor to that price range? The Chevrolet Bolt and competitors like the Nissan Leaf and Hyundai Ionic start in the $30,000s. Will consumers looking for sub-$30,000 models stop shopping for brand-new cars?

KM: I wouldn’t put a number on what the floor is, because of where things are changing so rapidly and how quickly we’re getting the cost out of the system. As we’re getting toward production with these, we’re learning a lot. So that’s the good news. And I do think the price of vehicles that are higher in the food chain, like the Cadillacs and Hummer EVs and the bigger SUVs, makes a more palatable business case. [Barra] and [Reuss] have said that, “We’re going to do these profitably, we’re not going to take huge losses on these.” What we have to do is evolve over time like I said, where we can hit top-to-bottom in our portfolio. 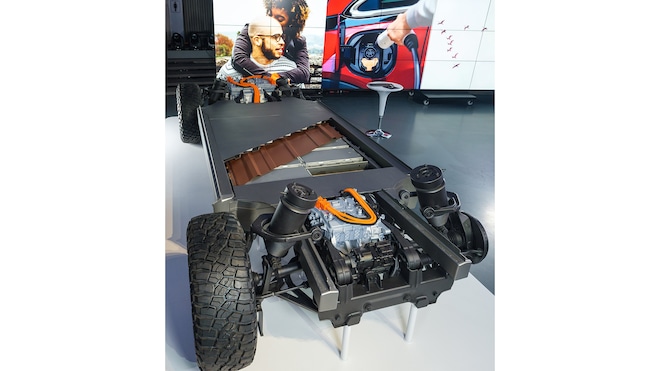 You’re in charge of a lot of new vehicles due to come on line, the first by 2023, and then some of the additional models shown in March by 2025. Will the pandemic shutdowns slow the effort? Do you see delays coming out of what we’ve been through the last few weeks?

How does GM as a traditional car company that’s been around for 112 years compare with Tesla for the EV-consuming public?

KM: I won’t compare to anyone, that’s for others to do, but I can tell you we have 112 years of experience building vehicles at high volume. We also understand the supply chain, the value chain that goes into manufacturing things. We have a tremendous amount of capability and capacity in our company, and so we’ve turned our attention to this. The Chevrolet Bolt gets high marks as a product, people love those.

The change is, we’re putting our intellectual horsepower and our resources behind developing batteries, developing cell chemistry, developing the manufacturing processes on the techs as they go into the cars, and how integral they are to maximize what our output is, in terms of what you get versus what you pay and how great the cars are. Just speaking for General Motors, I’m really confident that we have the capability, the intellectual horsepower—our R&D team has more than 3,000 patents related to electric vehicles. I’m very confident that the customer is going to be pleased with what we can deliver to them.

Beside cost, can Ultium be the leader in terms of battery technology?

KM: We know what we’re doing is different than anything else that’s out there right now. So, that’s all I could tell you.

Like the horsepower wars of 50 years ago, nobody’s standing still, right? Everything is a moving target.

KM: Right. That’s a great example because when I started in the auto industry in the late ’80s, the 8-seconds zero-to-60-mph car was more or less a supercar, and now there’s not a single-family sedan that won’t do that.

Will China will be a bigger market for GM electric vehicles than the U.S.?

What people want are awesome-looking cars. The infrastructure’s improving so that you can charge [in various locations]. My hope and gut feel is that there’s going to be an inflection point in the mid-2020s where suddenly people are going to be buying these at a faster rate than anybody expects, just because the driving experience on these vehicles is fantastic. And when you get used to charging your vehicle like a phone at night, when you charge it and you don’t worry about it, you never have to stop at a gas station. There’s a lot to be said for that kind of a lifestyle.