People who are desperate to get away from it all have never had more choices in terms of vehicles tailored to escape by traipsing into wilderness. We recently gave you a rundown of the coolest models in the EarthCruiser lineup, and now we turn our attention to Dacono, Colorado-based EarthRoamer.

Since 1998, EarthRoamer has built rigs that make escaping into nature a glamorous and luxurious undertaking. The brand’s first-ever model is called the LTS; it only went out of production recently, making it something akin to the Pagani Zonda of high-end overlanding due to its high price tag (the last of the LTS campers started at $490,000) and long-life span.

If you’re looking for affordable overlanding, it’d be best to head over here for lower-priced camper conversions. EarthRoamer presently sells two models, with starting prices spanning a gulf of more than $1,000,000. Though it costs a pretty penny to buy one of these premium off-roading vehicles, EarthRoamer offers lots of customizations. It stuffs its rigs with plenty of equipment to ensure customers have what they need, and more. EarthRoamer’s standard model is the LTi which replaces the LTS. It uses a carbon-fiber, vacuum-infused camper body which rides on a Ford F-550 chassis. Other distinct features include a raised roof, a large lithium-ion battery, and bunk side windows. It has other new features like digital electrical-control systems, multicolor interior lighting, and frameless, flush-mount glass windows all around. Essentially, this is the closest thing money can buy to an off-road-ready luxury mansion with cathedral ceilings.

The F-550 used for the LTi is equipped at the luxurious Lariat trim level, and it is powered by a turbocharged, 6.7-liter diesel V-8 engine producing 330 horsepower and 750 lb-ft of torque. Power is sent to the wheels via a 10-speed automatic transmission.

It even features a roof-mounted solar array capable of producing 1,320 watts of solar power. The battery bank is rated for 11,000-watt hours, so those intending to go way off the grid won’t have a problem keeping their electronics powered up. Other impressive stats include a 95-gallon diesel-fuel tank, a 100-gallon freshwater tank, and a 40-gallon gray water tank.

Other perks include five available floor-plan choices. Buyers can pick a layout for their EarthRoamer LTi that best meets their needs in terms of seating and sleeping capacities. The Telluride layout offers seats and beds for six and four people, respectively, while other plans allow for larger storage, kitchen, or dining areas.

A bare bones LTi, if you can call it that, starts at $590,000, but EarthRoamer says well-equipped examples typically come in at around $650,000-$700,000. After putting down the deposit, expect a wait of 7-10 months before EarthRoamer can deliver the finished product. 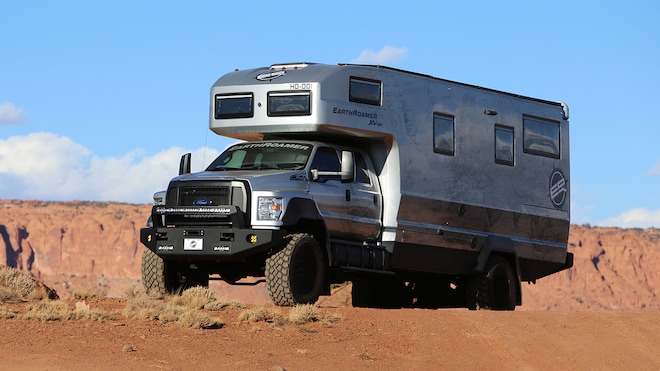 While the LTi seems like more vehicle than most would ever need, the EarthRoamer HD manages to ramp up the superlatives. Riding on a Ford F-750 King Ranch Chassis, the larger of EarthRoamer’s two offerings uses the same engine as its stablemate, but it loses 25 lb-ft of torque and uses a six-speed transmission instead of a 10-speed gearbox.

The EarthRoamer HD can hold 115 gallons of diesel, 250 gallons of fresh water, and 125 gallons of gray and black water. Battery capacity is up to 20,000-watt hours, while the solar-panel output climbs to 2,100. It has a hydraulic-leveling system, fully customizable floor plans, and a lightweight body.

On the outside, there’s a motorized awning with LED lighting and a kitchen that deploys from the side of the EarthRoamer HD. Not only is there a shower inside the vehicle, but EarthRoamer also equips a shower on the outside for cleanup after outdoor activities.

The EarthRoamer HD’s $1,700,000 price tag betters its little sibling by more than $1 million, and it get even more expensive from there with options. Each unit gets amenities such as heated floors, a washer and dryer, a dry bath, and further customization from that point onward. The EarthRoamer HD is on sale now, with the first deliveries slated for late 2021.

The post What, Exactly, Is an EarthRoamer? appeared first on Automobile Magazine.