How many now-defunct automakers saved their best work for last? While long-running brands like Plymouth, Oldsmobile, and Pontiac largely left this world with a whimper, playing out the string with a series of underwhelming products, there are a few who defied the odds and produced some of their most memorable vehicles against the dying of the light. Of these, perhaps none is more unforgettable, more timeless than the Studebaker Avanti.

One of the last independents to be felled by the great domestic automaker cull, South Bend–based Studebaker had been lurching towards insolvency ever since an ill-fated merger with Packard in 1956. After a period of tweaking existing stock such as the economy-car Lark family of compacts in a desperate bid to stay afloat, Studebaker’s surprisingly visionary president at the time, Sherwood H. Egbert, went all-in on the idea of a Hail Mary model that would dazzle buyers and restore prestige—and dollars—to the brand.

Thus was born the Avanti, a gift from designer Raymond Loewy and one of the most enduring cars to have emerged from the ashes of the 1960s.

Loewy was no stranger to Studebaker when Egbert tapped on his shoulder in early 1961, having previously worked on the company’s elegant Starlight coupe many years beforehand. Always eager to add a fresh project to his prolific workload, the noted industrial designer wasn’t cowed by the six-week deadline imposed for a full-scale model of the new vehicle. The endgame for Egbert was a car that would be ready for the 1962 New York International Auto Show. 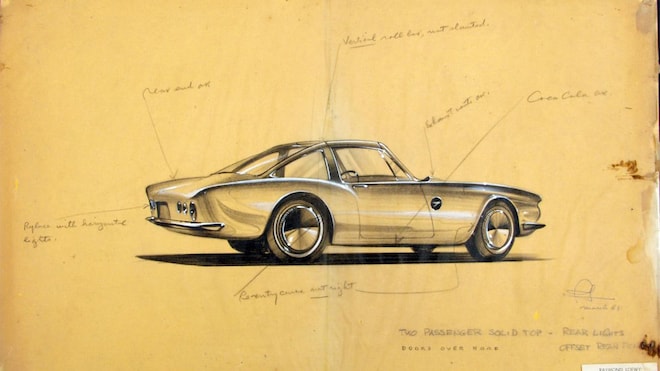 Loewy’s team consisted primarily of Bob Andrews, John Ebstein, and Tom Kellogg. From the beginning, the car was intended to look as aerodynamic and modern as possible and make a clean break from the design trends of the ’50s. This meant minimal chrome, an overall wedge shape, and a Le Mans-inspired pinch at the waist that also drew more than a little inspiration from that era’s Coke bottle. The initial clay model was longer, with flared fenders, than what eventually hit production, but Studebaker’s response was enthusiastic. Much of that first design would find its way to the showroom, with the addition of a power bulge on the hood that Loewy described as the “sight of a gun” that drew the eye towards “where the roadway would bend with the horizon.”

Egbert wasn’t an impatient man, but he was pressed for time knowing that his company’s financial footing was growing less stable by the day. It was expediency that saw Studebaker reach out to Molded Fiberglass Products Company in order to build the Avanti’s body out of fiberglass, which could be tooled up much more quickly than a traditional steel setup. The happy side effect was a car light enough to put a smile on Loewy’s face (3,700 lbs total), as he had been focused on keeping the coupe as quick on the road as it looked standing still. 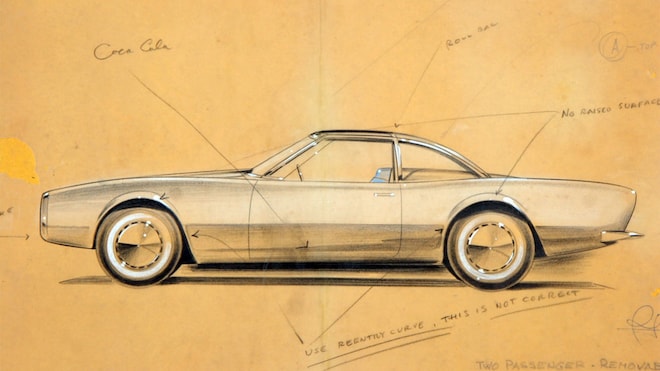 In keeping with the budgetary and chronological constraints surrounding the project, the Avanti design team was asked to choose an existing frame from Studebaker’s stockpile, ultimately chopping down the metal underneath a Lark convertible to fit the vehicle’s more modest proportions. Suspension was also Lark-based (coil-sprung in the front, leaf springs in the rear, heavy duty in both cases), but there were new touches to be found too, including the first disc brakes to be found on American car, as well as a roll bar integrated into the roof that worked together with a padded interior to better protect occupants.

While the Avanti may have been forced to transform a hodgepodge chassis into a decent handler (a feat which Studebaker’s engineering team accomplished with surprising skill), things were looking rosier under the hood. When the car was revealed in 1962, it was announced with a trio of exciting V-8 engine options. 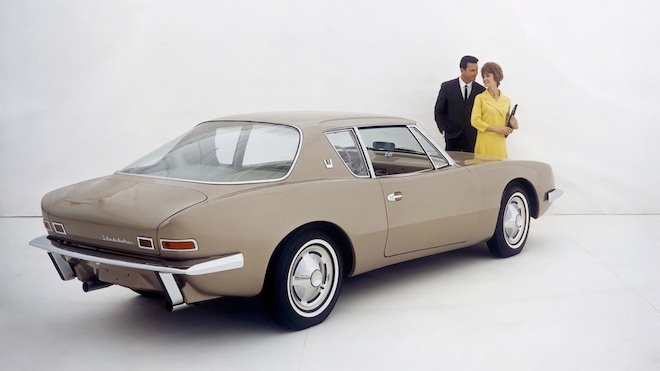 The base R1 car featured a 289-cubic-inch unit good for 240 horsepower, with R2 editions gaining a Paxton supercharger that pushed that figure to 290 horses. Ultra-rare R3 versions that squeezed 335 ponies out of a 304 cubic inch mill were also in the cards, although only a handful (nine in total) were ever built. Each of these motors were tuned by Paxton’s Andy Granatelli, giving them a serious performance boost over their standard Studebaker equivalents. Transmission choices included a four-speed manual and a three-speed automatic, with the brand’s Twin Traction limited-slip rear differential additionally available.

Performance was, predictably, quite solid. Entry-level Avanti R1 cars could hit 60-mph in 9.5 seconds from a standing start, with R2 models cutting two full seconds off of that figure. That placed the R2 within striking distance of Chevrolet’s 327-powered Corvette, and it was certainly quicker than the Ford Thunderbird and Buick Riviera personal luxury coupes in the Avanti’s price range. Furthermore, Studebaker took the Avanti to the Bonneville Salt Flats, where it smashed 29 production car records, eventually posting a top speed of nearly 170 mph in the flying mile with the company’s president behind the wheel.

From Life, To Death, To Rebirth

Although well received in New York, Studebaker’s rollout of the Avanti was far from trouble-free. With more than 100 fiberglass components in play, the automaker’s third-party manufacturer encountered great difficulty meeting the necessary tolerances, which made it impossible for Studebaker to assemble enough cars to make a serious dent in showrooms during the 1962 calendar year. 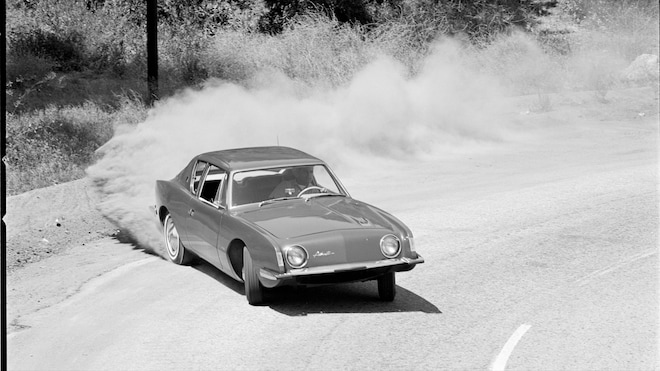 It wasn’t until late in the fall that the Avanti went on sale, with 1,200 finally making it into customer hands. For the 1963 model year just under 4,000 models were sold in total. Studebaker was in more than a little trouble at this point, and it was no longer a secret to the American public. The following year they largely elected to stay away from a car built by a company that had no future, slicing sales by 75 percent for 1964, the final year for the Avanti under the Studebaker banner.

That last sentence is an important one in the Avanti saga, because unlike other celebrated automotive swan songs this particular car would enjoy life after the death of its parent. Although Studebaker closed its doors in 1966, having eked out a few extra years of existence by moving production to Canada, it had already sold off the tooling and production rights to the Avanti two years previously to a private concern lead by a pair prominent Studebaker dealers named Nathan Altman and Leo Newman. 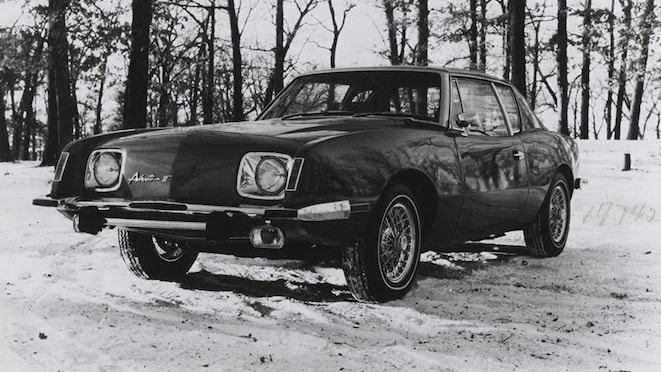 It’s here that the Avanti entered the second, stranger, and most enduring chapter of its life. Now a boutique luxury coupe with performance pretensions, its inexpensive fiberglass design made it profitable enough for a small concern to push out a handful of examples on a yearly basis, under the ‘Avanti II’ name, from the Avanti Motor Corporation.

Engines had to change of course. Studebaker had itself shifted to Chevrolet motors in the mid-1960s, and so the Avanti II gained a 300-hp version of the 327 it had once done battle against in the streets. With subtle alterations to the hood and the front fenders, the taller motor could be made to fit with relative ease, and the rest of the Avanti’s modular components—frame, body, brakes, transmission—continued to be ordered from their respective manufacturers.

The II went on sale almost immediately after the original Avanti had disappeared from the scene, and by 1969 more than 300 examples had been sold—at a price nearly 50 percent higher than what Studebaker had been asking. The Avanti II was marketed on its rarity as much as its plush features or (newly-improved) performance, and as the ‘70s proceeded it gained a number of engine upgrades to keep pace with the times.

By the early ‘80s, Altman and Newman had grown tired of the Avanti business and sold their operation to Stephen Blake, who would give the car its first comprehensive makeover. Chrome bumpers gave way to integrated, body-hued resin designs, and a set of square headlights transformed the front end’s previously lenticular look. Blake would also offer a convertible edition.

Featuring a legitimate dealer network to bolster sales, and with promotional stunts like running an Avanti (with II sliced from its badge) in the 24 Hours of Daytona (where it finished 27th in 1983), the third iteration of the vehicle would remain a going concern until paint issues would drive warranty costs through the roof, bankrupting the company in 1986. 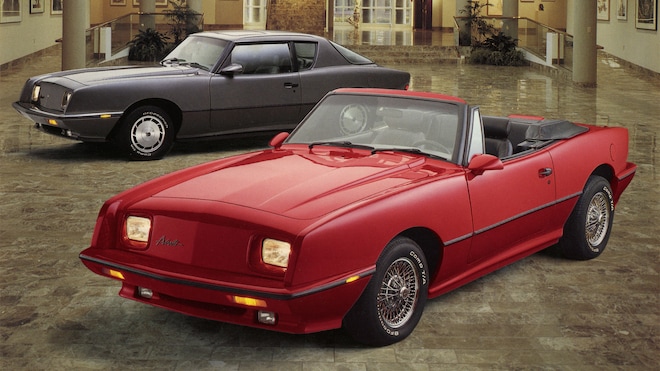 Rising from the ashes was the New Avanti Motor Corporation, which would shift production of the car over to the G-body chassis, borrowed from General Motors, before it was in turn sold and renamed the Avanti Automotive Corporation. By 1991, a lack of G-bodies combined with legal issues would force AAC to close its doors.

After a hiatus, several companies would make brief efforts to revive the Avanti on a variety of platforms—including the SN95 Mustang, and even the GM F-body—but by 2006 the car’s momentum had finally be stopped permanently.

It’s hard to think of another car from the classic muscle era that’s enjoyed such a prolonged period of near-continuous production, or had so many twists and turns baked into its story. That the Avanti has been re-evaluated from a modern context as a classic example of Loewy design, and certainly one of the leading lights of its time period in terms of style, has helped to give it a higher profile now than it enjoyed during the dark days of Studebaker’s downfall. Alongside the bullet-nose Commander and the elegant Golden Hawk, the Avanti has become an enduring symbol of a brand that fell victim not to a paucity of ideas, but rather the harsh economic realities of its time. 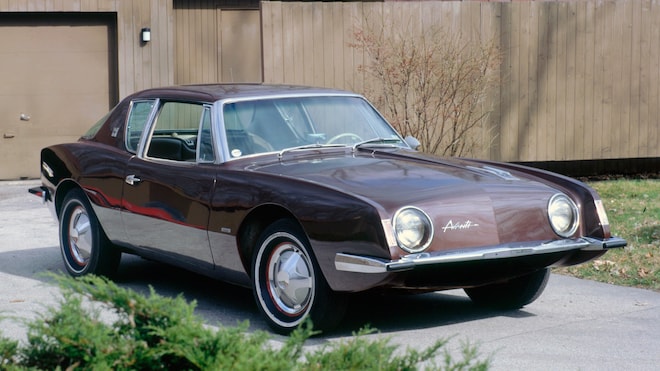 As a classic, the Avanti remains remarkably affordable, which is especially surprising given how few were actually built. Although R3 cars fully-priced, a base Avanti makes a comfortable and fun driver that stands out from the standard crop of ’60s American automobiles without being “weird.” In a world where every other garage on the block hides a first-generation Mustang, why not make yours Avanti?