Have your heart set on a Ferrari 250 GT or Aston Martin DB4, but a bank account that looks more like a regional manager’s than a CEO’s? I feel your pain. You want that classic GT formula, both rare and pretty enough to turn heads, but not so obscure that parts are unobtainium and it’s a nightmare to fix. Jaguar and Porsche are out—everyone’s got an E-Type or long-hood 911 these days.

I submit this 1965 Apollo 5000 GT Coupe—up for grabs at RM Sotheby’s Essen sale later this summer—as the perfect filler for that GT-sized hole in your garage. It hits all the right notes, especially considering it was first conceived as a more reliable but equally quick and comely alternative to the European sports coupes of the era.

As the story goes, Californians Milt Brown, Ron Plescia, and Ned Davis pooled their resources to develop a genuine alternative to the dominant European sports cars of the era, with a mind to create one of the many European-American hybrids that incorporated the voluptuous and painfully pretty lines of Italy with a hard-charging, effortlessly robust American V-8 powertrain. 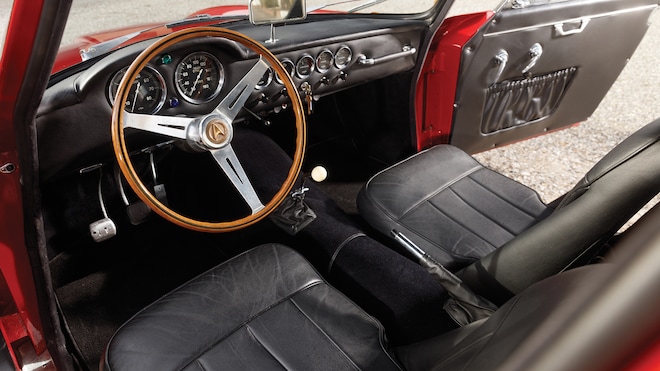 A chance meeting with Carrozzeria Intermeccanica’s Frank Reisner gave the trio a body supplier, so they set about developing a steel ladder-frame chassis that pulled much of its suspension componentry from contemporary Buick. Apollo also sourced Buick’s 3.5-liter V-8, putting down a respectable 225 hp through a four-speed manual transmission. Later, that 3.5-liter ballooned to 4.9 liters in the 5000 GT, the variant presented here.

Like numerous start-ups that came before (and after), funding soon ran out and the Apollo’s design and assets changed hands multiple times over several years before finally going defunct.  Interestingly enough, this apparently wasn’t for a lack of sales, but due to overextension when sales gradually increased.

Just 88 Apollos were built before it all went kaput, and that’s a shame. For a startup, the cars appear remarkably well-finished and engineered, and though you can see chunks of E-Type and Ferrari 250/275 in the design, that only makes it more pleasant to look at. Despite Apollos usually selling for around or just above the $150,000 mark, these beautiful coupes look right at home parked on a concours field next to the seven- and eight-figure European Berlinettas they brought the fight to over fifty years ago. 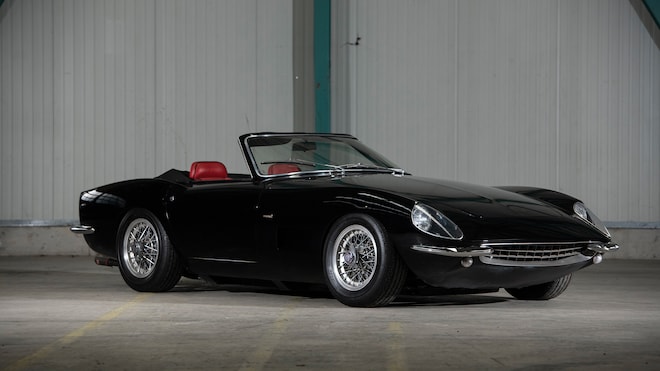 If you’re more of a convertible person, the Essen sale also features an Intermeccanica Italia, a “hybrid” sports car of Intermeccanica’s own design and production inspired by dealings with Apollo and later Griffith. Like the Apollo and other hybrids of the same ilk, it’s a low-slung classic sports grand tourer with sharp styling and a big V-8 up front. Coincidentally, it was designed by Automobile’s very own Robert Cumberford, who worked with the coachbuilder and automaker in the 1960s.

Roughly 500 Italias were produced through the early 1970s, when production shifted to the Indra and other vehicular ventures, before Intermeccanica shifted production to various replicas.

This black-over-red Italia is visually rapier-sharp, though I do question the extreme camber present on the front wheels. That shouldn’t be too difficult to fix, and once it’s ship-shape, this driver-condition roadster should be one of the better ways to get Ferrari’s good looks without the associated headaches.

The post Rare 1965 Apollo GT is the Affordable Alternative to a Vintage Ferrari or Aston Martin appeared first on Automobile Magazine.