It’s hard to believe Mazda’s been building cars for 100 years. Wait, it hasn’t. Then what’s all this talk about Mazda’s 100th anniversary? Despite only building its first four-wheeled passenger car a mere 60 years ago, Mazda’s been in the business of building various things (be it corks or three-wheeled motorcycles) for a grand total of 100 years. No surprise, then, that the Japanese automaker wants to celebrate such a feat.

One way it’s doing so is via a 100th Anniversary Special Edition trim for its various cars and crossover SUVs. Mazda thus far hasn’t committed to offering the special models in the United States, but we imagine they’ll be confirmed for American consumption at some point. 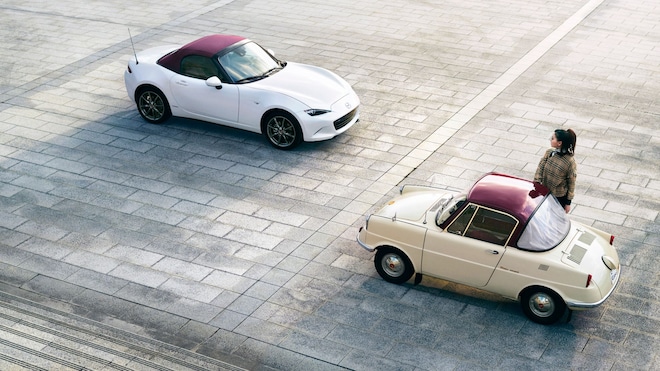 Those in other parts of the world, though, will soon have the opportunity to drive off in a Mazda that shares styling cues with the company’s original four-wheeled passenger car: the R360 Coupe. High-end trims of the little rear-engine people mover sported a special two-tone paint scheme that paired a white body with a contrasting color roof, which just so happened to match the interior’s hue.

For the sake of its 100th Anniversary Special Edition trim cars, Mazda is opting to use a white body and red roof/interior as inspiration. As such, all Mazda 100th Anniversary Special Edition models wear a coat of Snowflake White Pearl Mica paint and red styling details where possible, including the seats and carpets, and in the case of the MX-5 Miata, its folding soft top.

Other model-specific details include special badging on the front fenders, wheel center caps, and floormats, as well as a key fob and headrests embossed with the special anniversary-edition trim’s logo. The finished products benefit from looks that are both handsome and subdued.

Notably missing from the models are any mechanical upgrades, though. As much as we’d like to see Mazda bring these handsome-looking special models to our shores, we’ll ultimately make peace with whatever the company decides. We can’t say we’d feel the same way if Mazda decided to withhold its 100th Anniversary Special Edition cars and SUVs from the U.S. if they also boasted noteworthy powertrain or chassis revisions. The models were initially intended to be unveiled at the canceled 2020 Geneva auto show.


Read More
2020 Mazda CX-9 Signature AWD: The Fun Mobile
2020 Mazda CX-30 First Drive Review: So Good You Might Not Notice It
Why You Should Buy a First-Gen Mazda Miata