It’s another solid week in the books at Bring a Trailer, where sales volume continued to be strong, with any real bargains looking few and far between. This week, BaT began pledging $150 to charity for every car sold, a nice gesture that reminds us not everyone can afford to bid on classic cars from their living rooms in these trying times. Here’s a look at seven cars from the week of April 6 to April 10 that sold on Bring a Trailer. Remember, all prices include BaT’s buyer’s premium, which isn’t included in its on-site sales results. 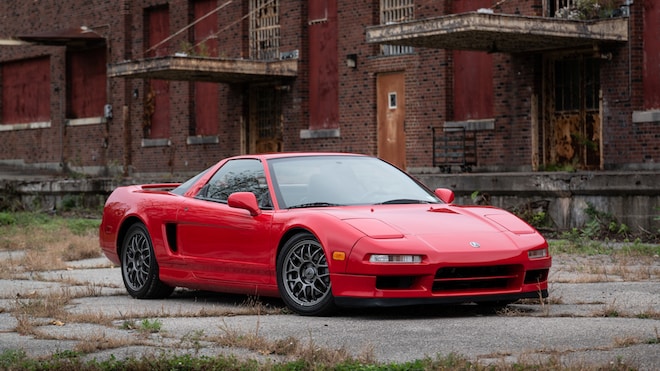 In the U.S., we were unfortunately deprived of some of the most special first-generation NSX models that simply weren’t sold here. We’re thinking, of course, of the 1997 NSX Type S and NSX Type S-Zero, limited-production variants with a focus on performance and lighter weight. The closest we got was with the 1999 NSX Alex Zanardi edition, built in a run of 51 cars and available exclusively in New Formula Red. Built to commemorate Zanardi’s Honda-powered, consecutive CART (now IndyCar) racing championships, the Zanardi Edition was claimed to be 149 lbs lighter than standard ’99 NSX models, with a fixed roof replacing the Targa-style top, special upholstery, a serialized plaque, plus lightweight glass and battery, BBS wheels, and manual steering. New, this car cost $85,000, and this car had 57,000 miles on it. Pretty good return on investment, if you ask us, and an indicator of the sort of premium a Zanardi Edition brings (nearly 200%, in this case). 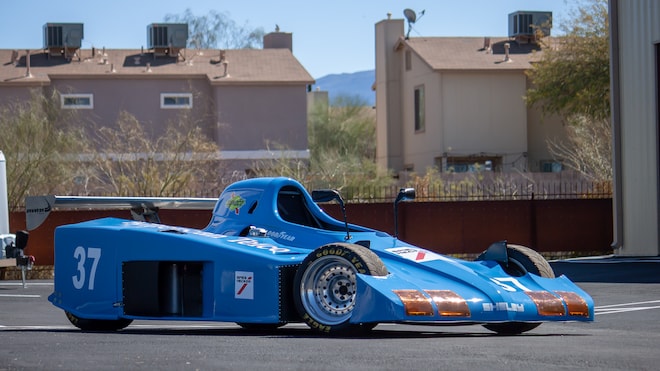 While Carroll Shelby is an automotive legend as both a race driver and a manufacturer, not all of his business ideas were successes. His chicken farming business didn’t do too hot, nor did the ill-fated Shelby Series 1 sports car. And then there was this: the Shelby Can-Am. Seems Ol’ Shel got it in his head to create an SCCA spec-racing series in the early ‘90s and built 76 examples of this Ford V-8-powered (and mighty odd looking) Shelby Can-Am. The series did end up running between 1991 and ’94, and supposedly this car, chassis 037, finished first at the 1994 Dallas Grand Prix, then won regional C Sports Racer championships in 2011 and ’12. This is an interesting piece of history, but it’s a little unclear where it would race today, making usability a challenge. That was reflected in the car’s failure to sell. 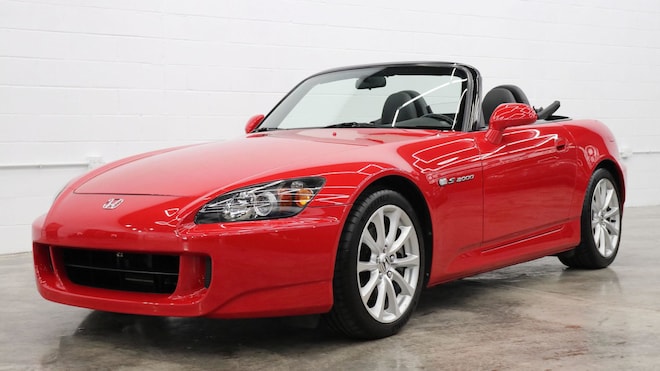 We recently took a look at the market for the Honda S2000 sports car and concluded that somewhere between $20,000 and $30,000 was the correct number for a no-stories, low-mileage, collector-grade S2K. Take a look at where this 17,000-mile car ended up and you’ll see it fell pretty much in-line with other results we’ve seen. This car didn’t come with the optional hardtop; if it did, maybe it would have cracked the $30,000 price point. A fair result for both buyer and seller that shows there’s still plenty of interest in Honda’s VTEC roadster. 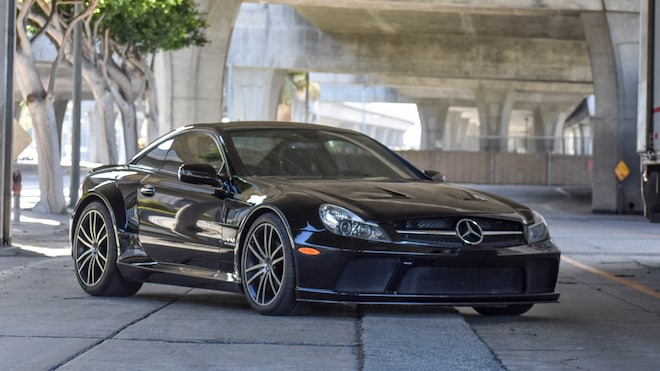 Used, late-model Mercedes-Benz SLs are plentiful and relatively inexpensive, routinely selling for mere fractions of their original and extravagant MSRPs. That all changes when you’re selling a rare, one-of-350-built SL65 AMG Black Series. Menacing doesn’t begin to describe this beast, with its black paintwork over wildly flared carbon fiber bodywork, height-adjustable coilover suspension, and twin-turbocharged, 661-hp 6.0-liter V-12 engine. Some 175 came to the U.S. market, this car included, with a $304,350 window sticker. With just 10,000 miles on the odometer, this one still took a 30-plus percent depreciation hit. We’ll see where prices level out on these cars over the next several years but consider this one fairly sold for now. In 1968, Lamborghini was still a relatively new company. The Islero was an updated version of its first two sports cars, the 350 GT and 400 GT. Designed as more of a grand touring car compared with the more aggressive, mid-engine Miura that was sold simultaneously, the Islero had a front-mounted 325-hp, 4.0-liter V-12, svelte bodywork styled by Carrozzeria Marazzi with input from Ferruccio Lamborghini himself, and 2+2 seating, allowing room for small children or extra luggage. Just 125 were ever built and Lamborghini’s continued support for its heritage products through its Polo Storico program has helped drive values in recent years. This car looked ready to go with lots of expensive service invoices and was very well sold. 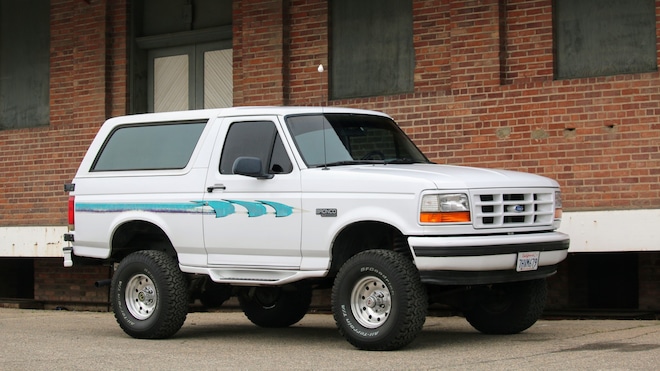 With the popularity of the new four-door Ford Explorer booming in the 1990s, the fifth-generation Ford Bronco was canceled after the 1996 model year, making this example one of the last Broncos produced–for now. Ford is reviving the Bronco badge for 2021 and we’re expecting to see the new version soon. If you can’t wait for the new version, this ’96 Bronco looked a fair buy, with 137,000 miles from new on the 5.8-liter V-8 engine and a sub-$10,000 price. Many Broncos were simply driven into the ground, but this one looks like it’s lived an easier life, with recent service documents and a six-inch lift kit installed. A very usable modern classic at a rock-bottom price. Well bought. 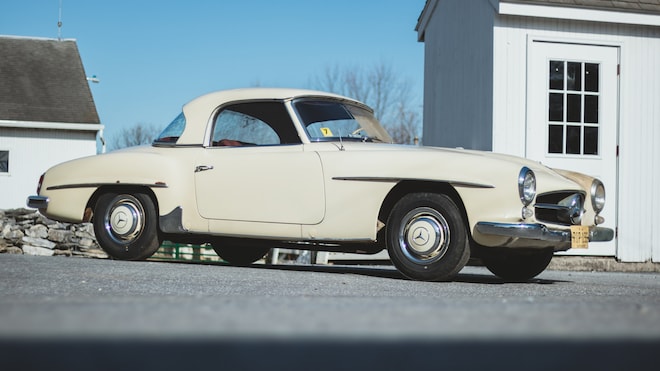 Sometimes a car’s story can be worth more than the car itself. Case in point, this 190 SL project car. Said to be in the same ownership for 56 years (since 1964), this battered, rusty and neglected 190 SL was driven for about a decade until being put in storage in the early 1970s, where it sat until recently. Originally, 190 SLs were built at the behest of early Benz U.S. importer Max Hoffman, who wanted a more affordable convertible to sell with styling that echoed the expensive and sophisticated 300 SL “Gullwing.”  The result was the 190 SL, which used a shorted sedan chassis and four-cylinder powertrain, but looked nearly as sporty as its big brother. Looked being the operative word. The 190 SL sky rocketed in value a few short years ago, with the best examples commanding upwards of $200,000. Today, values are off by at least 40 percent from the peak. We would have expected this project to bring less than half of what it sold for. Clearly, this was an emotional purchase by the buyer, who will no doubt be hoping the market catches back up when it’s time to resell. One thing’s for sure, the restoration will easily exceed this car’s $86,625 sale price.

The post A to Z: This 2009 Acura NSX Alex Zanardi Edition Just Sold for $140,000 appeared first on Automobile Magazine.