OPUWO, Namibia—Skeleton Coast National Park is a devil of a place for a truck. Desolate, expansive, and mercilessly whipped by the elements, these 6,200 square miles along Namibia’s western coast play home to troops of baboons and towers of giraffes, but nary a native SUV. Our herd of 2021 Land Rover Defender 110s explores these un-peopled parts with Government permission, but not without taking numerous precautions: a radio-linked convoy, redundant two-way GPS tracking, and a team of medics and mechanics armed with spare wheels, tires, and laptops. Just in case.

Land Rover long conceived of the Defender as a just in case sort of conveyance; as evidence, see bone-crushing Camel Trophy competitions of yesteryear in similarly forbidding environments. But the times they have a-changed, with today’s SUVs offering a plethora of soft roaders and only a handful of truly rugged, off-road-capable vehicles.

As such, our Land Rover Defender testers are maxed-out on capability: while the base Defender ($50,925) receives electronic air suspension and a transfer case with low gear, the First Edition ($69,675) and X ($81,925) models get Terrain Response 2 with its first implementation of individually configurable powertrain, steering, differential, and traction-control settings. The P300 starter model gets a twin-turbo, 2.0-liter four-cylinder producing 296 horsepower and 295 lb-ft of torque; opt for the P400 MHEV (mild hybrid), and you get a 3.0-liter turbocharged I-6 mild hybrid with an electric supercharger that puts out 395 hp and 406 lb-ft. The bigger powerplant is bundled into SE ($63,275) or HSE ($69,375) packages, which upsell elements like wheels, seating, driver assistance, and infotainment. SE, HSE, X, and First Edition models are offered with a locking center differential and an active rear differential.

Equipped with the $3,200 Adventure Pack, which affixes a nifty side-mounted, waterproof gearbox, our testers are also packed to the gills with accessory items in anticipation of the extremes: a ladder leading to a roof rack with a spare wheel/tire, Maxtrax vehicle recovery boards, and a RotoPaX spare fuel can. Up front, a snorkel promised delivery through steep aquatic crossings, as well as a clean air intake through dusty atmosphere. Adding a two-way GPS beacon and long-range radios to the laundry list, we were about as prepared as could be for our roam into the unknown. 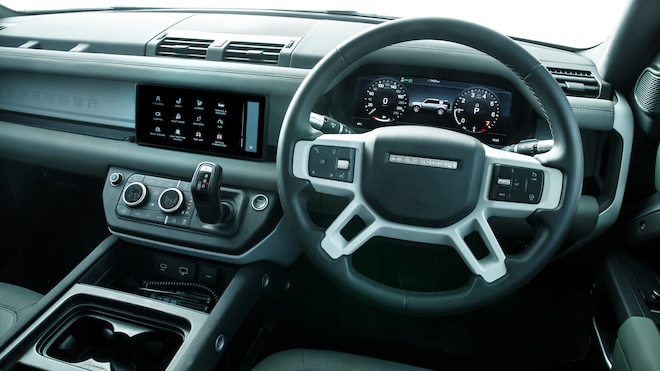 Adventurists seeking a rugged, raw experience within the new Defender 110 will find a mixed bag of cabin hardware. While the 110 certainly lacks the level of leather-lined poshness you’d find in a six-figure Range Rover, in its higher-spec form the Defender is civilized yet simple, offering leather surfaces and clean expanses of bare but inoffensive trim including a powder-coated magnesium crossbeam, which some might confuse with plastic. Once you get past the textural conundrum of what exactly it is you’re touching, a few familiar bits leap out: a dash-mounted shifter nearly identical to the piece found in the Range Rover Sport, a 10-inch touchscreen, and twin climate-control dials flanked by hard buttons.

Though the Defender’s blocky exterior lines and interior simplicity seem casually informed by strict functionality, most traces of crudeness are abandoned when its optional Goodyear Wrangler Duratracs hit the unpaved terrain. The first, and most crucial, differentiator here: air suspension. The front double-wishbone and integral-link rear suspension setup feels mostly compliant in its default setting, soaking up smaller bumps while transmitting more medium- and large-sized irregularities into the seat of the pants. You lose some of that cushiness when you select the higher ride-height settings, as the suspension’s air chambers increase with pressure and therefore create a firmer ride. But the higher altitude is welcome in areas like Namibia’s western coast, where all manner of physical obstacles defy you to make forward progress. In its tallest setting, the 110 claims an approach angle of 38 degrees and a departure angle of 40 degrees—behind the Jeep Wrangler’s 43.9-degree approach figure, but better than the Jeep’s 37-degree departure angle.

The clearance proves useful when negotiating some of the hairier stretches of the Van Zyl Pass, a notoriously treacherous, boulder-strewn route with narrow, crooked pathways. Peer over one of the adjacent ravines, and you’ll see recumbent carcasses of trucks that couldn’t quite manage the (somewhat trodden) path. Aided by guides pointing us around the terrain’s sharpest edges, the Defender crawls over this stretch easily. And if you don’t trust expert humans to thread the needle through jagged rocks and obtuse boulders, there’s also Land Rover’s ClearSight Ground View feature, which effectively gives you what appears to be an overhead view that looks through the vehicle’s hood. It’s a novel party trick that would make the most grizzled old-school off-roaders scratch their heads in wonder. 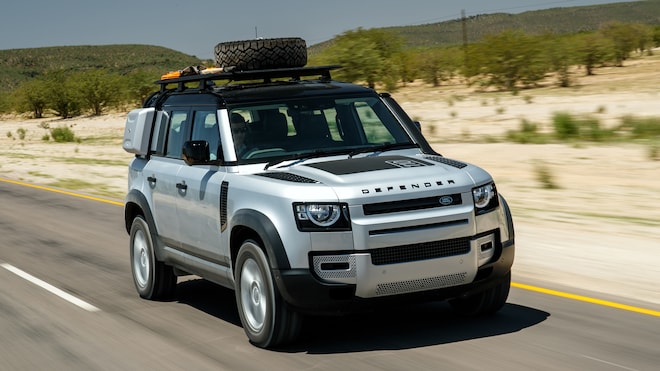 Back to that sketchy mountain pass: there’s some tire slide on the steepest, slickest bits when using hill-descent control, and some wheel lift on the most uneven sections that you might not experience with a solid-axle truck. But there’s still enough clearance to keep the hard parts from touching down, enabling the Defender to negotiate the tricky bits quite easily. If you’re accustomed to off-roading a full-size Range Rover, you might find this experience a bit more immediate, more visceral. While the Range Rover soothes with its cushy isolation and surprisingly plush ride over the bumpy stuff, the Land Rover Defender 110 feels a bit firmer and more immediate, sometimes hitting bump stops when you don’t slow down enough for jagged surfaces.

To its credit, Land Rover engineered the Defender less for comfort than absolute capability. And in that realm, the Defender manages iffy terrain quite capably, aided by underpinnings intended to take a beating. Though the D110’s aluminum D7x chassis is not dissimilar to the Range Rover’s in general shape, they share almost no common parts. Crucially, the Defender claims the stiffest construction of any model in Land Rover’s lineup, delivering triple the torsional rigidity of a body-on-frame design, which enables a wider range of ride heights and a wading depth of 35.4 inches. The important bits are beefed up to aid robustness, including steel subframes where the Range Rover used aluminum. Therefore, it’s not all too surprising that the new Land Rover Defender is less magic carpet, more downhill sled. 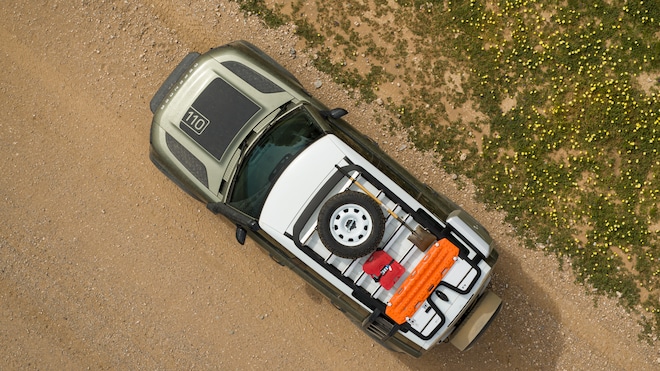 Choosing a setting from the Terrain Response menu—which, incidentally, would be a far more gratifying endeavor if it were accessed through a hard button or dial, rather than a virtual menu on a touchscreen—offers peace of mind in allowing the electronics to choose how to negotiate different types of surfaces, be it mud, sand, rocks, or otherwise. The tech is welcome, especially given its ability to achieve superhuman feats like individually braking or accelerating wheels, and effectively applying torque so the 2.4-ton SUV can claw its way out of seemingly impassable low-traction situations. But, at least on the pre-production Defenders we’re driving, their stability-control systems are restrained by holding down a button, but not shutoff completely. So, drifting along on loose gravel, for instance, means you’ll kick out the tail and hit a prescribed slip angle, but the nannies curtail your fun before things go too far sideways. When asked whether or not a “full off” stability-control setting will be available in final production spec, Land Rover engineers say they are thinking about it. Fingers crossed that consumers are empowered to completely free the reins while driving off-road; after all, what use is freedom if you can’t completely exercise it when you’re away from the rules and regulations of the highway?

That said, high-speed cruising through Namibia’s wide-open spaces over loose gravel puts the Defender in its happy place. Power is plentiful with the I-6 setup, and the eight-speed transmission cooperates well while transferring energy into forward motion. Though some steering corrections are necessary to keep the SUV along a fairly straight course (these are, after all, big vehicles on slippery surfaces), the big five-door manages to cope with rough terrain while billowing dirt, dust, and sand in its wake with nary a complaint, apart from a few gremlins on our pre-production testers. Land Rover’s roaming, laptop-equipped whizzes reset the error messages and beamed back the issues to development engineers in England. But glitches are commonplace in pre-production cars, and the electronics are still being worked out before the Land Rover Defender hits the market in the spring. Incidentally, the Defender’s hardware enables over-the-air software updates via two onboard LTE modems, and a processor quick enough to process 21,000 internal messages at once; like Tesla, Land Rover will likely address potential issues on the fly, as needed, once the vehicles are out in the wild.

And speaking of wild, our relatively drama-free excursion through Africa’s hinterlands begs the inevitable question: will Land Rover Defender owners be the sort to explore its most extreme capabilities, pushing its off-piste abilities to the edge? Or will the new 110s appeal only to the usual style-conscious urbanite suspects? As evidenced by our three days and nearly 500 miles of experience behind the wheel, the Defender is remarkably capable—perhaps a notch behind stalwarts like the Mercedes-Benz G-wagen and Jeep Wrangler, but miles ahead of the vast majority of SUVs on the road. And therein lies its strength, offering a comfortable, competent vehicle for everyday driving that also get you through a river crossing or a rock-strewn pass. It’s a narrow niche, this focus on extreme readiness with the underlying ability to handle daily life with civility. While the diehards may gripe that the new Land Rover Defender isn’t scruffy enough to honor its grizzled, dirt-splatted past, the vast majority will likely find it a welcome antidote to the usual sport-utility fare.